Renee and I now have four tween/teens between us.  The riskiness of their preferred activities has certainly risen above the level of lego and scrapbooking.  Renee’s younger one enjoys competitive karting and mine loves horse riding above anything else.  Instead of visits from Elsa and playing musical statues, the kids are now being invited to parties held in Escape Rooms and Indoor Rock Climbing Gyms. 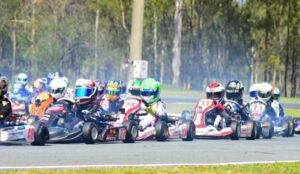 It is all as it should be of course.  We would far prefer they are exposed to a risk of injury from adventures than the certainty of ill health from long hours on screens.  However, like most parents, we are now faced with the dilemma of the dreaded “Waiver and Indemnity” required for our kids to take part. 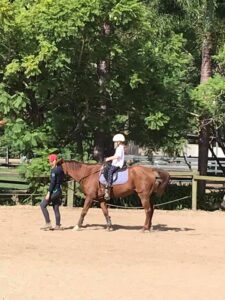 The waiver and indemnity has, ironically, seemingly become more ubiquitous since the enactment of the Civil Liability Act in 2002.  Under that Act, a person is not liable in negligence for injury to another which occurs as a result of the materialisation of an obvious risk of a dangerous recreational activity.  This is true whether or not the participant was aware of the obvious risk.

When this legislation came in, that seemed outrageous to me.  It seemed to mean that the operator of a bungy jumping company would not be liable for the death of a person caused by the operator forgetting to connect the cord (although this situation may be covered by another provision in the Act – it remains to be seen).

This may explain why every time our children are invited to do anything, we are handed a form like this:- 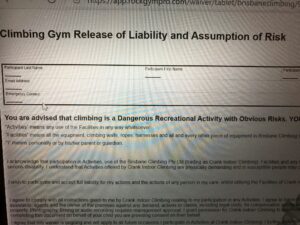 I try to avoid signing them where possible.  Many places have become firm that they will not allow children to participate without a parent signing the Assumption of Risk.  I expect that is a requirement of their insurance.  I don’t want my kids to miss out so I will usually, albeit reluctantly, sign.

So why my hesitation?  A parent cannot sign a waiver of their children’s rights.  If a child is injured as a result of the negligence of another person, they have a right to claim damages.  If the parent has agreed not to pursue the operator for negligence on behalf of the child, that may restrict the parent’s right to commence proceedings on behalf of the child.  However, once the child turns 18, they can pursue damages on their own behalf.

This means that many operators require parents to indemnify the operator against any claim made by the child.  If a child tries to commence proceedings against the operator, the operator could then join the parents as a party to the proceeding on the basis that the parent agreed to pay for any damages awarded to the child.  That is the legal effect of many of these forms.

Fortunately, many of the Assumption of Risk and Indemnity forms are too poorly drafted for them to be enforceable.  However, it is worth understanding what you are signing.

Anecdotally, I think many parents think they are just signing a form acknowledging that the activity is risky.  That is a very different issue.  Of course we understand and accept that life is risky.  We cannot wrap our children in cotton wool.  Nonetheless, it is important to understand that you may be risking financial responsibility for actual negligence on the part of the operator.